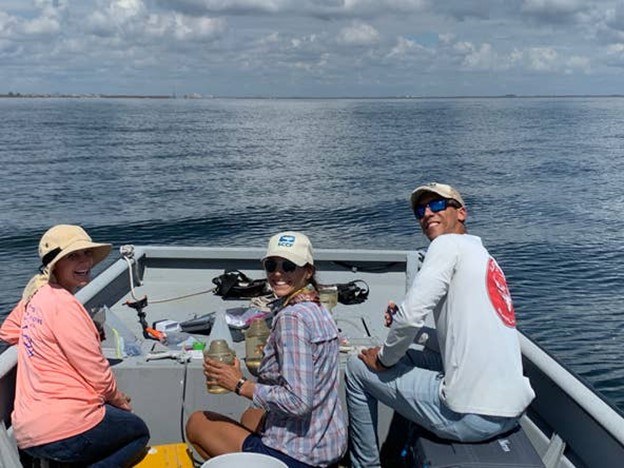 “I reached out to our colleagues at University of Florida’s Center for Coastal Solutions (UF-CSS) who we’ve been working with on a current harmful algae bloom research project funded by EPA and the U.S. Army Corps of Engineers,” said Milbrandt. “After seeing the devastation of the causeway and the islands, I knew that our routine monthly sampling from Lake Okeechobee to the Gulf of Mexico would not be possible with SCCF equipment.”

A team from UF-CSS began to get supplies together and planned a trip to assess the waters for Oct. 9.

“I was able to communicate the situation on the ground last Wednesday after visiting Sanibel and offered for them to stay at my house in Fort Myers, which was not damaged in the storm,” said Milbrandt.

The UF team included Center for Coastal Solutions Director Christine Angelini, Ph.D., who is also funded to conduct water quality research in the upper Charlotte Harbor. She has also been communicating with the Port Charlotte-based Coastal & Heartland National Estuary Partnership (CHNEP) and other water quality colleagues about a post-Ian response.

“Many of us are especially concerned about human health indicators, such as bacteria and toxins,” said Milbrandt.

The researchers arrived in Fort Myers on Oct. 9 as planned and got two teams out on the water the following morning to start sampling for harmful algae, nutrients, and indicator bacteria. They also are measuring dissolved oxygen.

“The waters looked particular murky in the river and Matlacha Pass and Fort Myers Beach but relatively clear off the coast of Sanibel, highlighting that there is a lot of variation in impacts of the hurricane on water quality in the region and a need to keep a close watch on changing conditions,” said Angelini.

They are evaluating a suite of water quality metrics relevant to both environmental and human health, such as nitrogen and phosphorus levels as well as fecal bacteria, phytoplankton and industrial pollutants. This work, which is part of a larger project funded by the Army Corps of Engineers, will provide valuable information about the safety of waters in the region after Hurricane Ian, a storm that likely mobilized a lot of land-based pollutants due to its extensive storm surge and flooding. 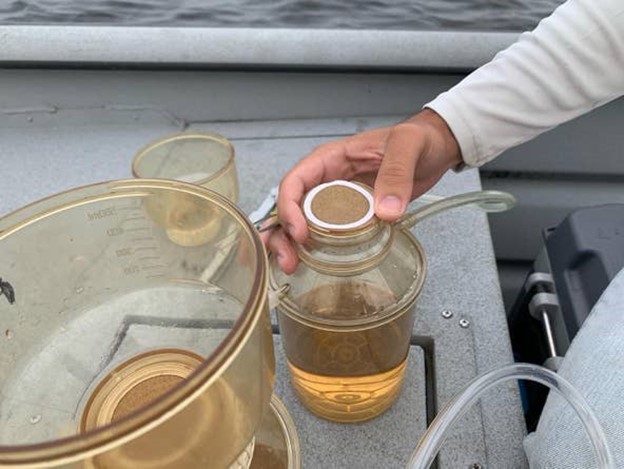 “We are looking forward to getting results back from the lab analysis to identify what’s going on out there. We really need these data to guide the next steps in the response,” said Angelini.

The water samples will be analyzed at the University of Florida and a lab located in Northport, FL.  Milbrandt and Greene will be processing additional water quality data collected in the field at the SCCF Marine Lab. Despite some wind-related building damage, continued power, and internet outage, the Lab will be back up and running soon at its Tarpon Bay location on Sanibel, where Ian’s storm surge measured about 8 feet. The state-of-the-art lab, which opened in fall of 2018, was built on 12-foot pilings to withstand such events.

“We expect to have preliminary results by early next week. The next sampling event is planned for early November and will continue until April 2023 thanks to grants from the EPA and the Corps,” said Milbrandt